Last month we gathered questions to Katy Bentz from our followers in our VK community. Here are the answers!

Was it in any way hard to voice Steph?
It was my first Voice Acting Job, so It was a whole new experience for me, but I enjoyed every minute of it! There were a few lines that we had to spend a little more time on, so we could make sure that it was being delivered how Phil Bache, the Voice Director imagined it. Other than that it was just a great experience!

Are you in any way similar to your character or was it tough to settle into her role because of your differences?
I imagined this tough, badass chick and I imagined what her voice would be and once I said the first line, Steph’s voice was created. From there, each time I got in the studio I centered into Steph and the rock of a person she is and was able to get in her head easily. Phil told me to go all out for the D&D campaigns and it was amazing to have the OK to really get into Dungeon Master Steph! I would say that we are very similar in our way of opening up to individuals. She’s there for people and I love to be there for my friends, family and even strangers. Voicing Steph has really taught me a lot and opened my eyes to this beautiful community and I can’t say how grateful I am! 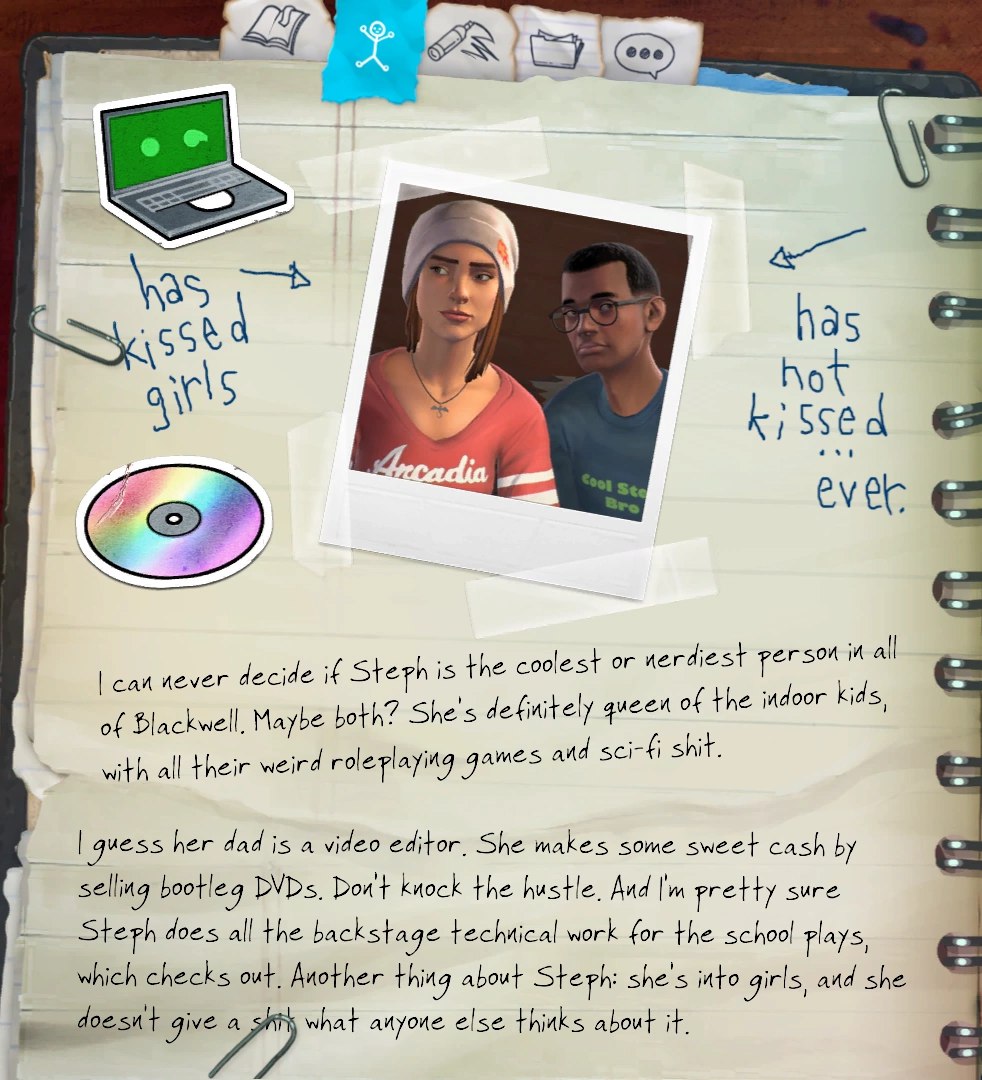 Do you think you succeeded in capturing the character the way she was intended to?
I do! I think that with the help of Phil we both were able to get Steph where she needed to be. I am extremely happy with the outcome of Steph and it’s amazing to see the LiS and gaming community love her as much as I do!

What’s the coolest part about Steph?
That she knows who she is, and she is not afraid to let anyone know.

Did you expect this amount of appreciation for your character from the audience? In your opinion, what strikes most about Steph, what makes people love her?
I had NO idea the amount of love and support that would come out of this game for my character. It has been the greatest surprise and I can’t explain my gratitude toward this community. I think people love Steph so much because she has a little bit of everything and that’s what makes her so relatable. She is a Lesbian D&D Dungeon Master Drama Nerd, who is not afraid of who is she and who is there for Chole. How could we not love Steph?

When you voice a character you put your heart into them, you give them your voice and a small part of yourself always stays with them. What do you feel when you see and hear a character who speaks with your voice?
Love this question! Oh man, it is such an amazing feeling! To see Steph in the game is such a huge accomplishment. It means so much to be a part of this game! As an actor, being able to see your work, especially when it’s being received so well, is inspiring and it motivates me to continuing reaching my goals as an actor. I am so thankful!

Is there a type of character you would never agree to voice due to some of their traits?
I’m not sure! At this point in my career I am open to new experiences and challenges as an actor!

Did you enjoy voicing a D&D master? Have you ever played it irl? If not, would you like to?
Yes! It was the such a fun role! Never would have guessed that I would be voicing a DM, but I am so glad I have now! And yes! I started playing D&D after voicing Steph! It’s a lot of fun! I am still very new at it, but I have enjoyed the times I’ve played. Haven’t DMed yet, but I would like to try at some point!

Were there any funny accidents during the process? Was the entire D&D scene totally scripted or did you have to improvise at some point?
There wasn’t anything crazy that happened, we laughed about some errors in the script that had Steph saying some funny stuff a few times, but other than that it was straight forward! And yes, the entire D&D scenes were scripted!

What do you think game creators wanted to show their audience? Has the game influenced you in any way?
Oh man, yes. This game is so beautiful. It follows the life of a character who is experiencing extreme struggle and it shows others in her life that are struggling as well. Death, drugs, assault, sexuality, loss, bullying, are some of the topics that are heavily shown in the game. This game speaks to a community of individuals who have dealt or are dealing with similar struggles in their lives. I know I have talked with multiple people who have said Chloe helped them get through a certain part of their lives, without Chloe and this game they don’t know what they would have done. And that right there, is all because of a video game and it’s so remarkable what developers have created for this community. This game and being a part of the game has influenced me. It has opened my eyes to empathy in the world. I think we can easily forget about what people are going through in life and it’s so easy to think you are the only person dealing with struggle, but this game helps remind us that everyone is dealing with struggle no matter how major or minor it may be.

What do you think about the LiS universe? What would you do if you had a time travel power like Max in the original game?
I think there is some crazy unexplainable things that are happening from Before the Storm to Season 1 and hopefully we’ll be able to learn more of the LiS universe in Season 2! Time travel, such a huge power to have. Because, as we know, if you change something it will affect the future. I’m not sure I would use it…maybe a couple times to see how it works haha.

Who is your favourite LiS character (except Steph, of course)? Why?
Rachel Amber, hands down. I just relate a lot to Rachel. I love her free spirit. I love how she is just living life the way she wants to. She has inner struggles like we all do, and she tries to mask it, but eventually they come out. You can’t always hide what you are dealing with, especially from your loved ones. She’s raw and it’s beautiful in my eyes. She’s a great character!

Would you like to swap places with one of the LiS characters? Which one?
To be in the LiS Universe? I honestly don’t think I could handle swapping places with any of the characters. I’d like to say oh I would do this different if I was this character, etc. But honestly, any character I would swap with I am sure I would fall into the same struggles each of them did.

What do you think Rachel means to Steph?
Love this question! I think Steph and Rachel would get along SO well if Rachel noticed her! Haha I think Steph likes how Rachel is a free spirit and happy with who she is, on the outside at least. I also think Steph can sense people really well, hence why she is always trying to be there for Chloe, but I think she can sense Rachel’s inner struggle as well and wants to help.

How would you name your character in a tabletop roleplaying game? Which superpower would they have?
My current character is Katrina the Rogue Halfling! Hahaha she’s British and a hoot!
I REALLY wish I was playing a wizard though, so I could cast some fun spells!

Do you play any online games?
I do! I started playing games after the release of EP 1 of Before the Storm! I streamed BTS EP 1 and EP 2 and after that, started streaming IRL and then eventually began streaming games/IRL on a regular basis! It’s been a lot of fun! You can check me out at Twitch.tv/katybentz

Whom did you want to become as a child?
I Veterinarian 🙂 Because I grew up loving animals.

What do you do in your spare time? Do you have a hobby?
In my spare time I enjoy dancing and karaoke haha I also enjoy going on outdoor adventures and exploring unfamiliar places. I absolutely LOVE swimming and the beach!

Do you have a favourite motivational quote? If so, could you share it with us?
I have too many favorite motivational quotes haha But I think my favorite one that I always come back to is “Everything happens for a reason.” That quote helps me understand that if something in my life happens that makes me upset I just have to know that it’s happening for a reason, it’s opening another door, allowing me to grow and get to where I am supposed to be in life.

Do you have any pets? If you do, which ones?
I have a kitty cat back at my parent’s home. His name is Banx and he’s a sassy guy with a lot of catittude, but I love him a lot and I got to see him over Christmas, which was amazing!